The eleven-year-old hero of LOST WITH LEEKS, Prince Nero, has a mother with ROYALLY STRONG opinions.

You won’t find these Bonus Scenes in the book because they are from Queen Ash’s point of view.

If you ever wondered how St. Nicholas got into the dungeon in the first place, these are for you. 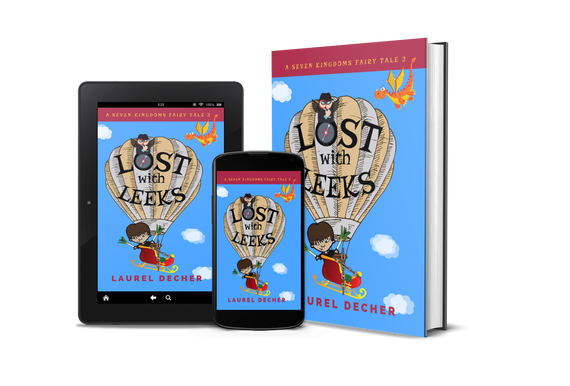 What would you do if your mother put St. Nick in the dungeon?

Eleven-year-old Prince Nero wishes he didn’t have a gift for getting lost! He has to get his team together and lead a rescue mission for St. Nicholas.

But his friends don’t want to follow him. A hot air balloon gives him even more chances to go the wrong way–up, down, and sideways!

This pesky yellow dragon isn’t helping him get along with his hot air balloon crew.

For more about how Nero rises to the challenge, click here or on the cover.

Only here for the Bonus Scenes? Scroll down, my friend, scroll down. 🙂

The dungeon that inspired the Blackfly Kingdom's Water Dungeon

The rope runs down into the dungeon and through the middle of a round wooden disk, like a swing on a single rope.

If you were the prisoner, you had to balance on this wobbly disk to keep from falling into the Rhine River below.

Queen Ash of the Blackfly Kingdom is very fond of her Water Dungeon. She finds lots of uses for it in LOST WITH LEEKS.

In the Blackfly Kingdom, Queen Ash spread a huge black net over her castle, from one side of the Rhine River to the other. Confused bats veered off at the last moment and flew around the poles at the ends.

Unfortunately, Rudolph the reindeer didn’t have radar. His feet got tangled in the net. St. Nicholas set the sleigh down on the roof of the Blackfly Castle.

“Gotcha!” Queen Ash came out on the parapet. “You’ve been flying through here every year with goods and you’ve never paid customs. Here’s your bill!” She handed him a fat scroll tied with a black velvet ribbon and ordered her Blackfly archers to pull the net closed around the sleigh.

“I’ll keep your sleigh and reindeer for your deposit until you pay in full,” Queen Ash said as she held open the door for St. Nick.

“My reindeer need a warm, dry place to stay,” St. Nicholas said, unhitching them from the sleigh. The reindeer stamped on the roof tiles and broke off pieces.

“Stop that!” Queen Ash said. “They can stay in the courtyard as long as they don’t make a mess. Archers! Spread the net over the courtyard once they’re in.”

The reindeer flew down into the heart of the Blackfly Castle and St. Nicholas followed Queen Ash down the stairs.

“Been busy? Haven’t seen any of your boots out by the front door in years,” St. Nicholas said.

Queen Ash sniffed. “You’d only put coal in them if I put them out.”

“Still have a lot of gingerbread left, then?”

“You heard about the Christmas market?” Queen Ash glowered at him.***

“It is my business,” he said. “I was glad to see your booth there. That’s the whole reason I flew by. Thought there might have been some empty boots waiting for me.”

“Hah!” Queen Ash opened the door that led down to the water dungeon. “This is the only thing that’s waiting for you.”

“And here I thought the Christmas spirit had found you at last.” St. Nicholas offered her a candy cane with black stripes. “I had these made just for you.”

Eagerly Queen Ash unwrapped it and licked the curve at the top. “Oh! I love black licorice!” But then she caught herself. “You’re trying to soften me up, but you’re not leaving until you’ve paid all your back customs. That comes to . . .” She took out a black accounts book and ran her finger down the list. “15,000 gold coins.”

“Ho, ho!” St. Nicholas said. “You’ll have me here as a guest for quite some time if that’s what you’re waiting for. I hope you’ve ordered enough hay for the reindeer.” He went peaceably down the stairs as if he knew he wouldn’t be there long.

Have YOU heard about the Christmas Market?

If you want to get the whole story, it’s FREE for members of my Readers List. 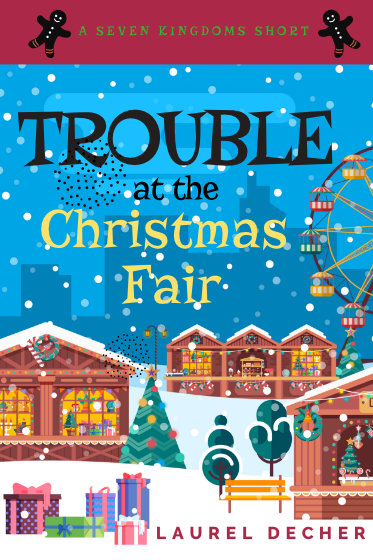 “Oh, St. Niiicholasss!” Queen Ash yodeled into the echo-y dungeon, a few days later. “I have a surprise for you!” Stopping at the edge of the well, she batted her eyelashes at St. Nicholas.

He leaned back against the wet stone wall and tilted his head back, adjusting his spectacles. “Have you now?”

Why wasn’t he beaming with gratitude? Queen Ash frowned.
“You could look happier!”

“What is it then?” St. Nicholas asked.

Queen Ash snapped her fingers and two Blackfly archers stepped forward and saluted. “Bring the prisoner up!” The archers heaved on the winch and brought up the swing.

“Or letting me visit my reindeer?” St. Nicholas said, clearly trying to lower his expectations.

As if a queen couldn’t give good presents. Queen Ash huffed.

“Keep quiet, old man,” one Blackfly archer said, but the other looked uncomfortable. “I have two little kids at home.”

Queen Ash looked him over. She might have to change out the guards to tighten security.

She led them past the courtyard. The reindeer stampeded over to the side as soon as they saw St. Nicholas. He patted their heads and talked to each one.

It was as if he didn’t care what her surprise was! She’d worked so hard on it. First she’d sent plasterers, then painters, and then carpenters. Exhausting. “If you’re finished with your pets, we can get on with the show here.”

St. Nicholas followed her meekly up the curved stairs to the next level. They passed the big bread oven.

“King Schwartz would never leave ME,” Queen Ash smiled a secret smile and fluttered her eyelashes.

“The fire in the oven is out.” St. Nicholas pointed. “I thought maybe the king was traveling.”

“He’s in Paris at the patisserie conference,” Queen Ash said. “He likes messing around with flour. When he comes back, he’s going to make me a giant cream puff, glazed with chocolate as black as night.”

One of the Blackfly archers snorted. The same one that had mentioned little ones before. Queen Ash made a mental note to cut his pay. She pointed to the Rhine river, far below them now. “If you need a refreshing bath, you can leap from here. Or you can take a lap around the castle.” Queen Ash tapped her foot, meaningfully. “Your choice.”

The archer saluted and rattled down the stairs to go to his self-administered punishment. St. Nicholas wiped his brow on his sleeve.

“Here we are,” Queen Ash said, when they reached the top level. The remaining archer sprang to open the door and stood back at attention.
“I’ve had this room done up just for you. It’s 800 Euro a night. That almost covers the reindeer feed.”

St. Nicholas stepped into the tiny room. It should have had a wonderful view of the Rhine in all directions, but the windows had been plastered over. There was a strong smell of fresh whitewash.

But there was a clean bed, made up with a black velvet comforter, and a black porcelain pitcher of water with a bowl for washing. Compared to balancing on the dungeon float, it was an elegant room.

“It’s the best AirCastle room I have,” Queen Ash looked modestly at the floor. No one would be able to say she wasn’t treating St. Nicholas with every possible consideration.

If they did, she’d show them the plasterers’ bill. This kind of improvement wasn’t cheap. It was a shame about the windows, but if she hadn’t plastered them shut, those flying reindeer would have found a way to carry him off, even without the sleigh.

That was a rude thing to say about her nice surprise.
“Until the fumes die down, it’s better not to have a fire in here,” she told him, quite kindly. After all that time in the dungeon, he should be used to the cold. Wasn’t he from a cold climate anyway? That’s why he had all these silly reindeer. “Well, enjoy!” She looked around the room one more time.

St. Nicholas lay down heavily on the bed. No manners at all. Had he forgotten there was a queen in the room? She raised her eyebrows at the archer, who prodded St. Nicholas in the stomach with the end of his bow.

St. Nicholas’s eyes opened and, seeing the archer, he got to his feet. “Sorry, ma’am.” His eyes fell shut. “I haven’t seen a bed in a while. It’s a lovely surprise. Thank you very much.”

Queen Ash fluttered her eyelashes and hoped he would fill up her boots this year. He owed her for the last few decades. She needed them filled up with gold coins, so she could pay her debt to Cochem. After he’d paid for his room, she’d have a little nest egg so that next time King Schwartz went to Paris, she could go too.

“Oh, one more thing,” Queen Ash said. “There’s a calendar for you on the wall, so you can keep track of the time. If you’re going to make your rounds for St. Nicholas’s Day.”

St. Nicholas looked at the calendar and then at Queen Ash. “It is hard to see the sun from in here. How thoughtful.”

Her surprise was working. St. Nicholas would ask to send a letter to his bank as soon as he’d had a night’s sleep. The queen was sure of it.

It was the only sensible thing to do. She wished he’d hurry up and do it.

She locked him in.

That’s the end of the Bonus Scenes! 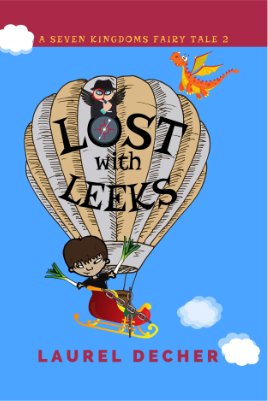 Ready for a new challenge?

If you’ve read LOST WITH LEEKS, you may remember the Saffron twins–Magellan who loves to make maps and Saffy who always hits the bullseye. In UNDER PRESSURE WITH A SQUASH, there’s a little . . . dragon . . . multiplication problem. 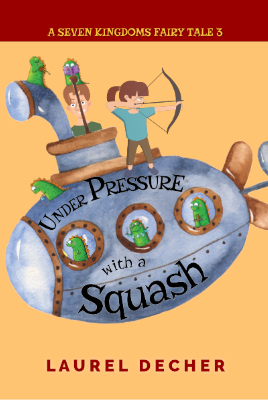