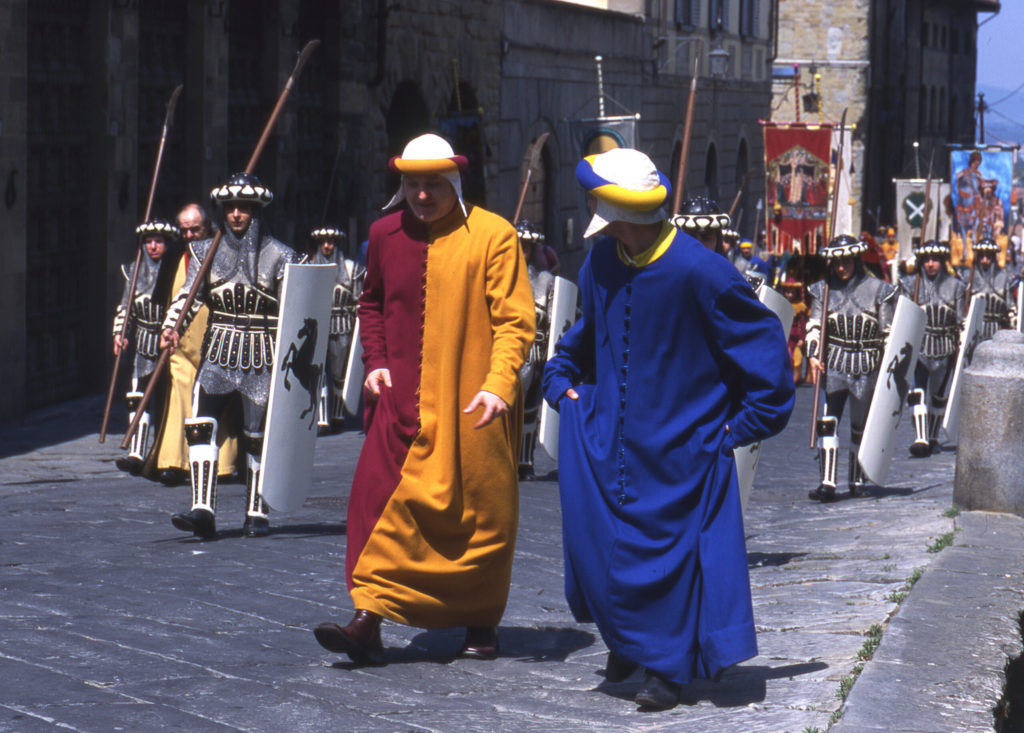 Until the day her older brother, Guido, went away to teach at the Cathedral School, Bella knew exactly what the end of the world would feel like.

It would be like breaking through a roof and being lowered into a crowded house. She would finally see as well as everyone else, like the paralytic on a pallet. She would see Papa again and he would take her around the golden city where everyone lives when this world ends.

But now that Bella’s older brother was leaving home for good, the end of the world sounded lonely. It might be hard to find your place there, as a latecomer.

In Guido’s honor, Mamma had put on her best red overtunic and covered her shining, black hair with a red cloth worked in silver thread. Bella’s unruly hair stuck out from her coif and the wind tugged at it.

The herringbone bricks of their street led from the heart of Arezzo, past their house, to the top of the hill, and the city wall. They had said good-bye to Guido in their hall, at their own gate, and at the top of their street. But they kept on to the north gate, to walk a little longer together.

Beyond the north gate was the outside world.

Bella had seen twelve feasts of the Lamb and was really too old to cling to her brother’s hand in the street, but she couldn’t help it. Ever since Papa died, Guido had been her music teacher.

He gave her a half-smile and his warm, brown eyes encouraged her to learn this new lesson too. “Do you think my choirboys will sing the psalms backwards the way you do in Mass?”
Her words had dried up this morning. She shook her head and tried not to think about the choirboys who would take her place. Someday Guido might be Bishop of Arezzo, but what would she be without him?

Her unruly hair stuck out from her coif and the wind tugged at it.

Mamma kissed his cheek in her graceful way and Bella tried to smile. The weight sitting on her chest wouldn’t let her speak. She put her farewell gift in his hand.

The tiny scroll contained the letters of his name, as beautifully as she could write them: G-U-I-D-O. He ran a finger over the picture of their fig tree and shot her a quizzical smile. “Sing it for me.”

Good. He’d recognized the psalm in her drawing. She took a deep breath. Her lip trembled, but her voice ran lightly down his best qualities in a featherlight dance of quavers and semi-quavers, just as he’d taught her. A good man is like a tree growing strong next to rushing water.

“Well done.” Mamma clapped her hands and her eyes were too bright.

“Flawless.” Guido pinched Bella’s shoulder. “You little flatterer.” He swung her around in the old way, but he stumbled. “Ooooph! This nightingale’s too heavy.”
Bella pressed her cheek against his arm. He tugged a spiral of her hair, kissed Mamma, and passed through the gate.

The next morning, the bells rang for None, but Bella still lay in bed. The dullness from Guido’s leaving had settled into a sick feeling in her stomach. She opened the bed curtains, but the air in the solar was stale with old smoke. Mamma and Felicità were in the courtyard below, loudly sorting everything from Guido’s chamber.

They didn’t need Bella’s help, so she wandered into the hall. In the corner, a dog chewed on a bone and a forlorn hen from the courtyard picked its way through the rushes. Bella went up on the dais, trailed her fingers down the head table, and came to a dead stop.

The hall was too dark to see it properly. No tapers were lit on the dais at this time of day and the hearth fire had nearly gone out. Bella poked it into bright flames and pulled the book down in her lap. The weight of it pushed against the ache in her stomach.

It couldn’t have come from Guido’s chamber. He didn’t own a book.